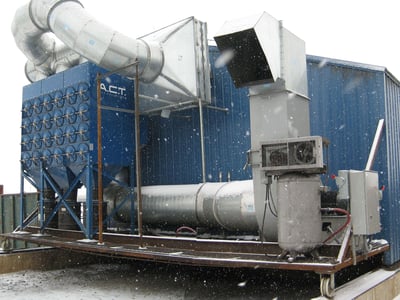 A.C.T. Dust Collectors was contacted by a metal recycling customer in Ohio that uses torches to cut large chunks of steel down to smaller sizes, which results in a nasty plume of yellow smoke. All this was done outside. It was an environmental hazard; they had to do something to contain the smoke.

The large size of these chunks of steel meant that they were often moved with cranes. Due to other limitations, this operation had to stay outdoors.

So how do you move large pieces of steel that is torch cut outside, yet contain the dust and smoke from the environment? This was surely a unique application, and a unique confinement solution had to be suggested. A team of engineers from the plant worked along with our engineers and came up with an ideal solution — a mobile building.

The large building was built on railroad tracks so it could encase the work zone when needed.  On the back of the building sat an ACT 4-48 industrial dust collection system rated for 24,000 CFM, also mobile. The building would sit away from the cutting location as the large chunks of steel were put in place by the crane. Once the steel was in place, the building was rolled over the work zone. The smoke was now contained and all the smoke was filtered out by the metalworking dust collector and safely returned to the environment.