What Type of Fan Should I Choose for my Dust Collection System? 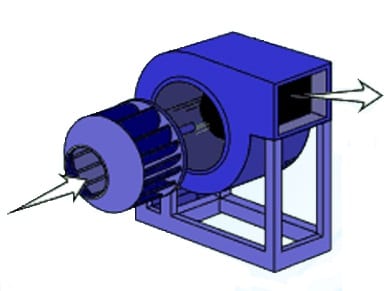 There are many options to consider when choosing a fan for your new dust collection system. The most commonly used fans in dust collectors are the Radial blade fan, the BI (backward inclined) fan, the BC (backward curved) fan and the airfoil fan. Each fan wheel has its own characteristics and performance limitations.

This wheel is like a paddle wheel, with or without side rims. The blades are perpendicular to the direction of the wheel’s rotation and the fan runs at a relatively medium speed to move a given amount of air. The radial blade fan is designed for material handling applications and is also used for high pressure requirements, generally the least efficient of the centrifugal fans.

The wheel's blades are flat and lean away from the direction of the fan wheel’s rotation. This fan is used in industrial applications where efficiency at a good value is important. This fan type is more efficient then the radial blade fan. The fan horsepower curve is non-overloading.

The airfoil fan is the most efficient and quietest of the centrifugal fans. It is used in many industrial applications where energy savings are important. The fan horsepower curve is non-overloading. The blades are a hollow design and can be made with special construction for clean air applications.